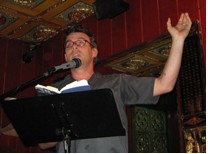 Article from Mr. Cabezas' Journalism Class
From Shakespeare, to Maya Angelo, we each have a poet inside us, and just don’t know it.

The kids at Thomas Starr King middle school know that if they do have a talent with words, they can go to a thing called the Poetry Slam. The next slam will be on Friday, October 20th.

The poetry Slam is held in the auditorium, and it’s a place where kids at King can recite a poem they have, or hear a poem from students another student.

“I think its cool because the people that go up on stage, want the people in the crowd to feel different emotions, said student Suzie Kebabchyan, 8th grade.

Marcy Mejia has participated in a slam, and said: “The first time, I was nervous, but after a couple of times, I felt comfortable being up there. We can express ourselves and cause it’s pimp.”

“It’s great, and exiting to have students express themselves in a way that only they can express,” Abee said.

Interested students should submit their poem to Mr. Abee in room 146 by Monday, October 16th.

Do we have another famous poet on our campus? Perhaps they can thank a little thing called the poetry Slam.